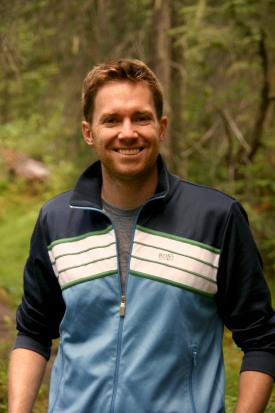 at the University of Guelph. His MSc, under the guidance of Dr. Nicholas Bernier , focused on the stress response in trout during seawater acclimation. Paul then moved to McMaster University where he completed his PhD (2009) with Dr. Grant McClelland, where he examined the toxicogenomic effects of chronic copper

exposure in zebrafish. This was in collaboration with Dr. Chris Wood, who recently retired from McMaster and has taken up a position as Adjunct  professor at UBC.  After his PhD, Paul moved to Ottawa where he completed his postdoctoral studies in association with Dr. Tom Moon. At the University of Ottawa, Paul undertook numerous projects all falling under the theme of energetics and metabolism in fish. It was at Ottawa where Paul found his passion in studying epigenetics in fish, which is the current theme of Paul’s research as an Assistant Professor in the biology department at the University of Waterloo.  In addition to his lab research, Paul maintains field based research at the Bamfield Marine Sciences Centre studying the physiological adaptations of the plainfin midshipman found along the Pacific coast of North America.

Paul currently lives in Waterloo with his wife Karlee, his 2 children, a dog, and 1 blue fish named Elsa.

Heather joined the Craig lab in the fall of 2015 as an undergraduate thesis student, and graduated in May 2016 with an Honours Biology degree. Heather continued on in the Craig lab as a Master’s student starting in May 2016, followed by a switch to a PhD in the summer of 2017. Heather’s research is examines epigenetics and multiple stressors in the aquatic environment. As part of the “next generation solutions to ensure healthy water resources for future generations”, Heather is focused on the effects of multiple stressors on the persistence and rates of shedding of environmental DNA to better model the dynamics of eDNA in the Grand River watershed. She also hopes to extend this study to include the effects of multiple stressors on the nature of environmental DNA in order to identify biomarkers of stressed fish to be used in biomonitoring.

Ivan joined the Craig lab as an undergraduate thesis student in Fall 2016 and received his Bachelor’s of Science in Animal Biology in April 2017. His project began as a study of the exosome profile of fish, specifically how this profile changed in response to environmental changes. For his Masters thesis, he is studying the effects of handling stressors on exosomes and whether stress produced exosomes help to propagate the stress response at a whole organism level through miRNA shuttling.

Rhiannon Hodgson (Jan 2018- Aug 2018) I’m in 4a biology, with an animal biology specialization. I have had jobs related to both animal and plant physiology but enjoy animal physiology more mainly because of my love for animals. I hope to work in conservation or some form of related government work when I am finished with school.

Ivan Cadonic (2016-2017) BSc thesis title “Analysis of exosomes produced by goldfish exposed to heat, hypoxia, and venlafaxine and the tissues targeted by the microRNA they contain”

Kevin Lee (2016-2017) BSc thesis title “Analysis of miRNA in embryos of zebrafish exposed to heat, hypoxia, and venlafaxine in a multi-stressor approach.” – Kevin is currently in an Environmental MSc at University of Toronto

Heather Ikert (2015-2016) BSc thesis title “Analysis of miRNA in eggs, spearm, and embryos of zebrafish exposed to heat, hypoxia, and venlafaxine in a multi-stressor approach.

Shahithiya Santos (2015-2016) BSc thesis title “Assessing the toxicity of venlafaxine on digestive and antioxidant enzymes of the intestine of adult Danio rerio when subjected to multiple environmental stressors.” – Currently working in Scarborough.